General advice when choosing a security alarm system in your home or business.

The variety of alarms and their fitting is a complex subject. As a starting point the installation should meet with British Standard PD6662 (This calls up European Standard EN 50131 and UK standards such as BS8243 for alarm confirmation). These standards cover both hard-wired systems and wire-free. Though more expensive than many wire-free or DIY packages on the market, they are more reliable and conform to the National Police Chiefs Council Security Systems Policy.
If you are thinking about the installation of an alarm system in your home it is worth taking into account that the police response to alarm activations varies according to the type of alarm installed. In recent years the percentage of false alarm calls caused by equipment, communication or user error represented in excess of 92% of all alarm activations nationally. In order to redress the balance in favour of genuine calls the National Police Chiefs Council Security Systems Policy has been adopted by the police in which two types of alarms are defined, together with the relevant police response.
Type A - Remote Signalling Alarms, including intruder alarms terminating at approved central monitoring stations. They must be maintained and used in accordance with British Standards PD6662. Such alarms will be registered with the police and identified by a unique reference number (URN) for intruder alarm response and a URN for hold up alarm (personal attack alarm) response. The police response to their activation will be based on the assumption that an offence is taking place, but against the background of competing urgent calls and available resources. Such a response will also be conditional upon the number of false activations in any 12 month period, in which case the activation may receive a lower priority police attendance.
Type B - Audible Only and Hybrid Alarms, including bells-only and automatic dialing alarms, as well as alarms from non-compliant companies and non-compliant central stations. URNs will not be issued for these systems. To obtain police attendance, in addition to their activation Type B alarms will also require some indication that an offence is in progress, e.g. from a witness at the scene.

In identifying a compliant company installing Type A alarms you should seek answers to the following questions:
Police accept the installation of remote signalling alarms from alarm companies whose business is subject to inspection by independent inspectorate organisations identified in police policy.

Today we were at Discovery Surf School in Bigbury, fitting a CCTV system using the latest AHD cameras.  Thanks Martin, see you for some surf lessons when the weather improves! 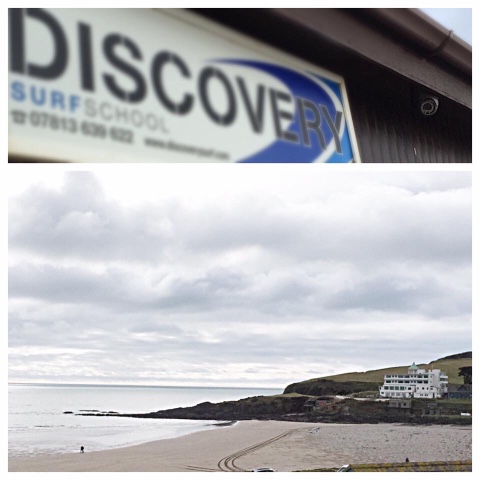 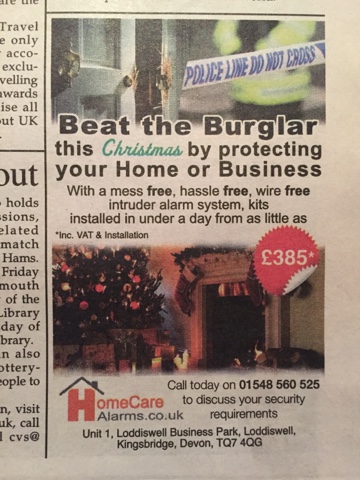 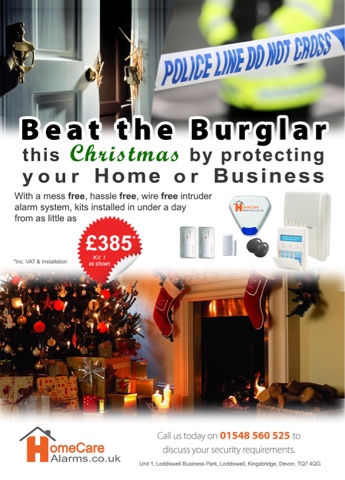 Away from your house a lot.... or do you have a second home?

For some homeowners, the ability to keep an eye on their home even when they are away is one of the biggest perks of having a home alarm system. As technology has improved, many home alarm systems now allow users to log on to the internet via their computers or smartphone and access their home security system remotely. This type of system allows the home alarm to be remotely armed or disarmed, cameras to be monitored, household lights to be turned off and on, air conditioning or heating to be turned on or changed, and motion detectors to be monitored. All of these functions not only allow homeowners to watch for intruders, but they also help to protect the home remotely. Turning on lights at a specified time through remote access can help to give the illusion that someone is at home even when they are not. Accessing the heating or air conditioning can help to prepare the home for sudden temperature changes to prevent pipe damage and can also help to save on electric or gas bills. In most cases remote access comes with a small fee, but it offers homeowners the opportunity to take charge of their home even when they are out of town.

Our Advert in Octobers edition of the Kingsbridge and Salcombe Post! 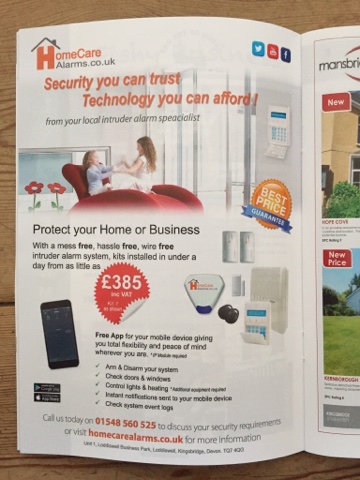